If you have a scheduled class with Mattson Sensei, you will receive meeting information with instructions how to log in to the Virtual Dojo or conference room. 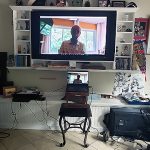