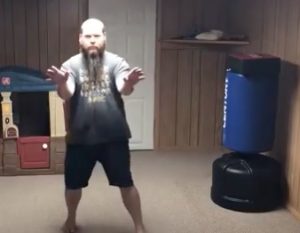 George Mattson’s Virtual Dojo has changed my karate forever! When I started my journey with Mattson Sensei, way back in June of 2012, I came to him as student that had a few years off from traditional Uechi training.

By following the Virtual Dojo curriculum, Mattson Sensei rebuilt my karate from the ground up! I was shocked and amazed at how much detail can be attained from reviewing a slow motion clip of my technique with Mattson Sensei‘s guidance!

With years of hard work and superior teaching, in November of 2014, I was tested online and earned the rank of Nidan! The testing board consisted of well known and high ranking Uechi teachers, all of whom came to the test with open minds. On that day they were all impressed with Mattson Sensei‘s program and came to realize the benefit of online teaching!

In the years since, the program has kept evolving. A few months ago Mattson Sensei introduced his Old Way method. A 12 week course that has proved to once again change my karate forever! Through this program I’m looking at Uechi training through the eyes of a beginner once again! And the view has been outstanding!

Joining the Virtual Dojo has been the best decision I’ve ever made for my karate journey! I’m glad all those years ago I took a chance and reached out to Mattson Sensei. I couldn’t imagine my karate training any different now. Best decision ever!

Do you need more information? Contact us using the form or the following: