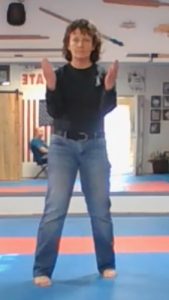 Henry Adams said, “A teacher affects eternity; he can never tell where his influence stops.” In exchange for an education in Uechi-ryu Karate Sensei George Mattson was given a mission by his teacher Tomoyose Sensei to take Uechi-Ryu Karate back to his homeland, the United States. Sensei Mattson is fulfilling his mission in several ways. He has taught hundreds of students in person, many of whom have become teachers. He has then continued to mentor teachers by traveling and conducting seminars. Lastly, as the computer age has connected the global community, Sensei Mattson has spread Uechi-Ryu across the United States and internationally with his Virtual Dojo.

Without the guidance of a teacher, learning can become stagnant. “A good teacher can inspire hope, ignite the imagination, and instill a love of learning (Brad Henry).” Sensei Mattson has clearly stated his expectations and given me specific guidelines to reach those expectations through his online newsletters, training blog, and monthly meetings. When I have questioned him about application, he has purposefully withheld information about certain techniques in order to push me to discover application on my own. After viewing the video clips of my work, he has given me positive and constructive feedback during our monthly online meetings. Afterwards I feel recharged, confident, and ready to tackle my next goal. I feel that my knowledge of Uechi-Ryu has grown with Sensei Mattson’s teaching. I also enjoy studying Uechi-Ryu’s rich history. My roots in Uechi-Ryu are growing strong as well as my focus and self-discipline.

I live in rural Colorado and am a teacher of early childhood education as well as a teacher of Uechi-ryu.  I love teaching and I have had the privilege of having great teachers who have instilled in me their love of teaching. I have always believed that my students have taught me more than I could ever have taught them. “It is by teaching that we teach ourselves, by relating that we observe, by affirming that we examine, by showing that we look, by writing that we think, by pumping that we draw water into the well (Henri Frederic Amel).” It is clear that Sensei Mattson loves teaching.  He has influenced my teaching abilities with his attention to detail and his encouragement to have fun while training. Sensei Mattson has stated on numerous occasions “Train often and train smart.”

Do you need more information? Contact us using the form or the following: